I love the resourcefulness of people when it comes to food and its’ utilizations. Here are surprising places that carrots have shown up in: bio fuel, warding off the devil, coffee substitutes, lasers, hat decor, antifreeze, wine, & hangovers (for too much carrot wine).

“The day is coming when a single carrot freshly observed will set off a revolution.”

And you might of thought they were something you dipped in ranch dressing.  So here is to a crazy carrot history that warrants its own Carrot History Museum in the U.K.
(Information was gathered from their site unless otherwise linked)

Carrots are speculated to originate in Afghanistan. Wild carrots were purple, red, white, and yellow, but never orange.  It is rumored that we can thank the Dutch for the cheery orange color. In the 16th century, Dutch carrot growers created the orange carrot in honor of the House of Orange (the Dutch Royal Family) by cross breeding yellow carrots with red carrots.

The newly born orange carrots made their way to England during the reign of Queen Elizabeth I.  The British adopted the crunchy veggie with arms wide open. At one point there was a glut of them, and the Government campaigned that carotene, which is believed to help night vision was largely responsible for the Royal Air Force’s increasing success in shooting down enemy bombers.

“This is a food war. Every extra row of vegetables in allotments saves shipping… the battle on the kitchen front cannot be won without help from the kitchen garden.” – Lord Woolton, Minister of Food, 1941 – So much for urban gardening being a new trend.

People bought this concept hook, line and sinker. This ruse not only reduced the surplus vegetables but also helped to mask the chief reason for England’s RAF’s success – radar. Imagine…. deception from the government that was beneficial for the public!

Britain continues the fun by manufacturing carrot wine. And…not wanting to be wasteful, carrot leaves were worn in ladies hats as decoration in the fashions of 17th C England.

Just across the English Channel, the Germans used finely chopped roasted carrots for a coffee substitute. 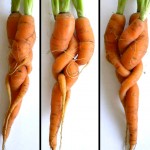 The Greeks also have their place in carrot history.  They called the carrot a philtron, which translates to “love charm.” The Greek foot soldiers that hid in the Trojan Horse were said to have consumed ample quantities of raw carrots to inactivate their bowels. Why haven’t the airlines taken this concept and run with it?  They should hand out bags of carrots instead of pretzels.

The packaging is already in place for the airlines. In what may be the best marketing campaign for vegetables since Popeye, baby carrots have been transformed into junk food. Well you just have to see this $25M ad campaign to believe it.
“Eat ‘em like junk food”

Wait…there is more! The Anglo-Saxons included carrots as an ingredient in a medicinal drink against the devil and insanity.  Ok, forget the airlines serving them as a snack…they should be serving them as a drink.

Not to be outdone, Two Scottish scientists found a way to convert the vegetable into an advanced material to make products from fishing rods to warships with a product called Curran.  If the airlines won’t serve carrots, maybe they could make a plane out of them.

I love that carrots are so versatile. I ask that you keep an open mind with this tasty recipe that I believe even the biggest cooked carrot haters will appreciate. Recipe adapted from Staci Billis.
You will be amazed how well these flavors go together! I learned how to cut carrots in squares at a knife skills class. I thought it looked fun….my husband thought they looked unnatural. So?

I will leave you with one last bit of carrot trivia. Did you know the last meal on the Titanic included creamed carrots in the fifth course. For a taste of the adventure, click here for the original recipe.

I wonder what else could be done with creative carrots.
…and then, she paused for thought.