Everyday Eggplant is a simple, quick, fresh, and light version of the dish Eggplant Parmigiana and is perfect for a meatless main. 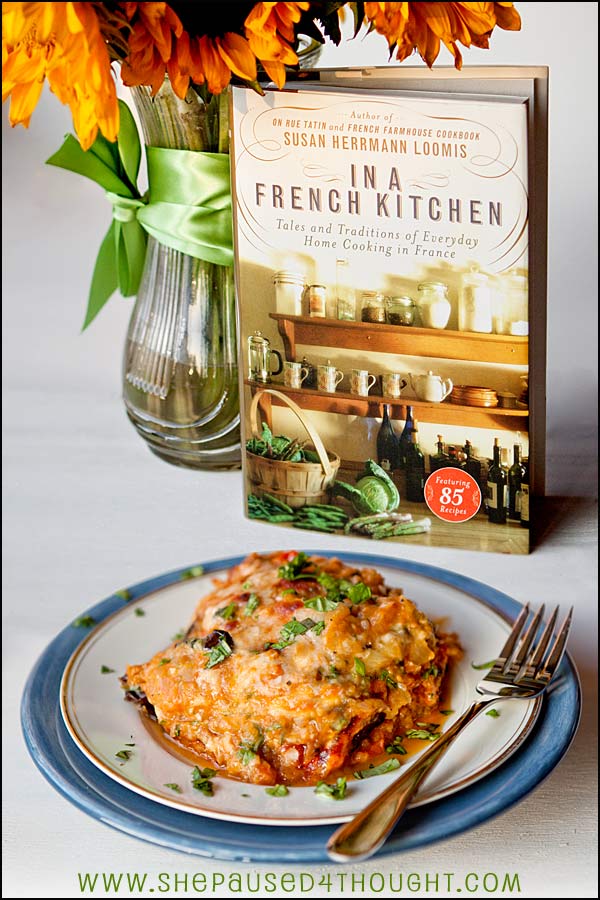 I have always dreamed of taking a cooking class in France. So when a milestone birthday came along, my husband took me to Paris. That was when I first met Susan Herrmann Loomis.

I enrolled in her Market Cooking Class. We began the class by learning to shop at the local farmer’s market for the best produce of the season. Once in the kitchen, we got our “hands in the dough” transforming all the goodies into a fabulous, fresh, French meal.

I was in heaven. You can read about my adventure here. When Susan mentioned she was teaching French cooking classes in the Black Hills of South Dakota in a few months, I jumped at the opportunity. It was fabulous as we learned and lived food for four days.

A few months later I found myself at Susan’s 12th-century renovated convent in Louviers, France. The building is directly across the street from the flamboyant French gothic church of Notre Dame. The town is charming, beyond expectation and imagination. 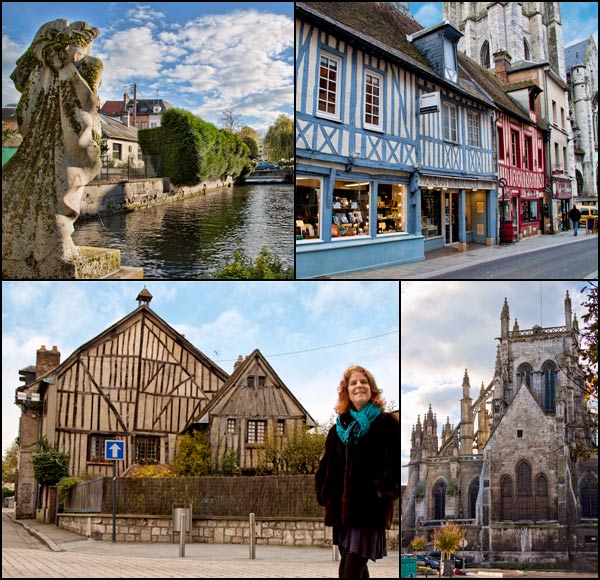 While in Louviers we chatted with farmers at local markets and learned what defines good produce. Susan and I laughed, talked, cooked, and cooked some more. She taught me so much about the French way of life in and out of the kitchen. 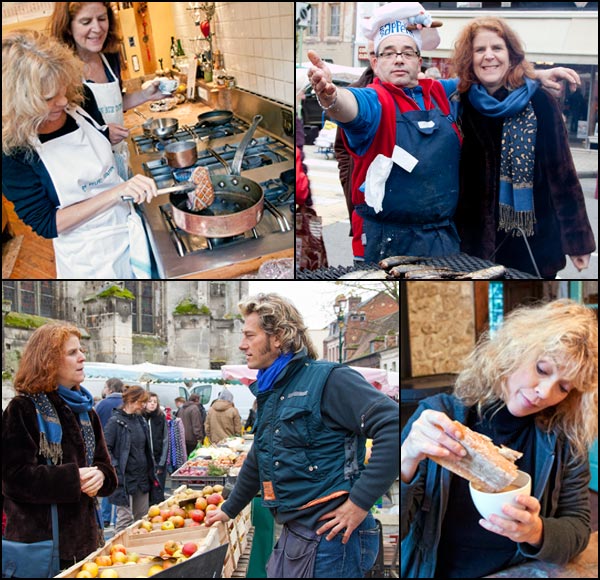 She confirmed everything I wanted French cooking to be.
Fresh. Fabulous. Fuss-free. (with good looking farmers being a bonus)

When I purchased Susan Herrmann Loomis’ latest book In a French Kitchen: Tales and Traditions of Everyday Home Cooking in France I devoured it like it was a finely prepared meal, savoring each chapter. It reads like an endearing memoir, yet contains 85 recipes with plenty of unique French techniques.

I was amused and fascinated by her culinary commrads, making me feel as if I would be among friends in their kitchens. Below are a few of Susan’s featured friends. 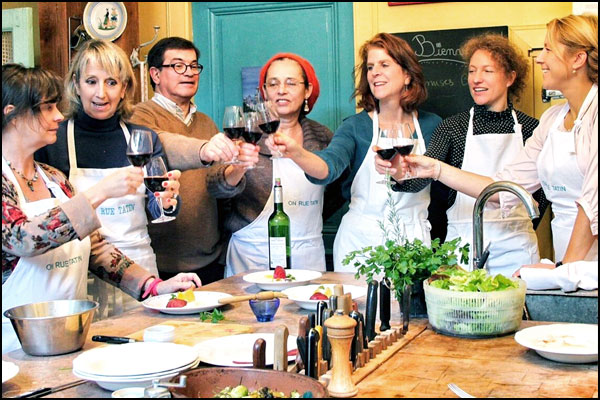 I was suprised by how different each home chef approached his/her work in the kitchen. All emphasized simple, seasonal and, no matter how busy the cook or the eater, pleasurably relaxed. So wonderfully French!

One of my favorite stories from Susan’s book is about what she did with 60+ pounds of beef cheeks, which you learn about in Chapter 4. I just happened to be one of the lucky recipients of that escapade when I was in Louviers.

Susan taught me how to make beef cheeks with with braised carrots and a squash puree. Pure bliss. Recipe on pg. 77.

“After a French breakfast, once everyone has gone on their way, the lingering peace remains. I love walking into a French home at that moment. There is the scent of tasted bread, the underlying aroma of butter and the tempting perfume of coffee. Bowls–which are, somehow, always pretty, rarely color coordinated, filled with personality as each belongs solely to its owner–are right where they were left, there is that messy scatter of crumbs on the table. The tableau speaks of warmth, comfort and togetherness.”

Excerpt from In a French Kitchen pg. 148 – Painting below is my interpretation inspired by Susan’s kitchen. 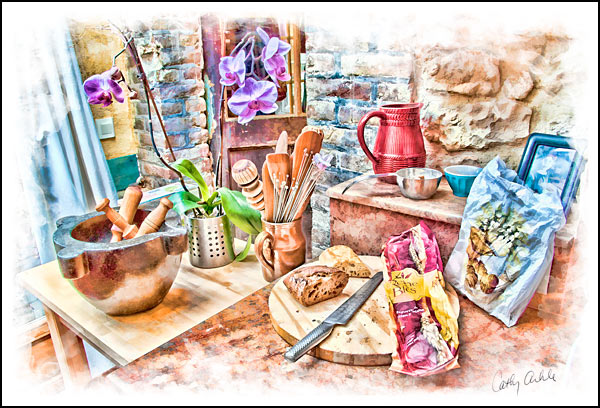 In a French Kitchen Book Event

Susan was recently in Los Angeles on a book tour and stopped by Melissa’s Produce to talk to a packed house of media, food bloggers, old friends and plenty of new ones. 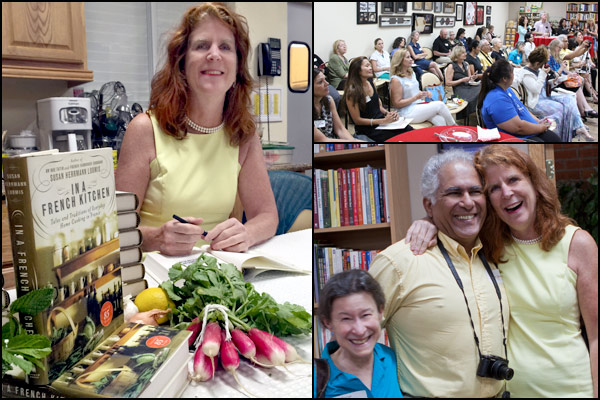 Susan, seen here demonstrating the art of eating the French Breakfast Radish with leaves in tack, on top of a slice of baguette slathered in butter, topped with Fleur de Sel — so simple and yet extraordinary.
Tip: Don’t throw away radish greens, add them to your salad. 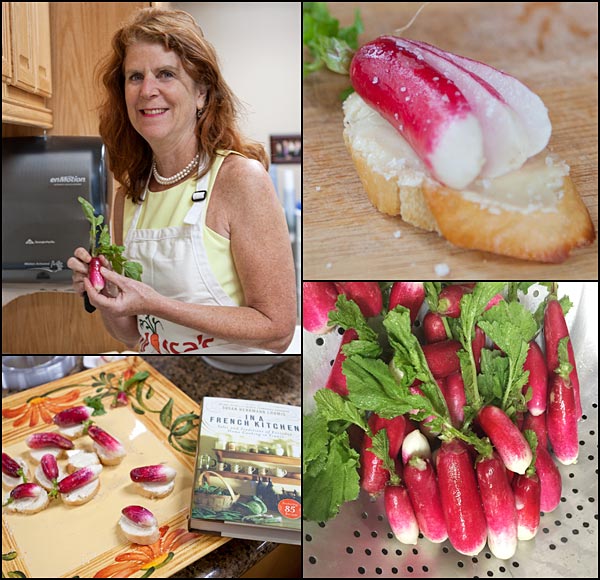 We also had a delightful array of dishes from In A French Kitchen. 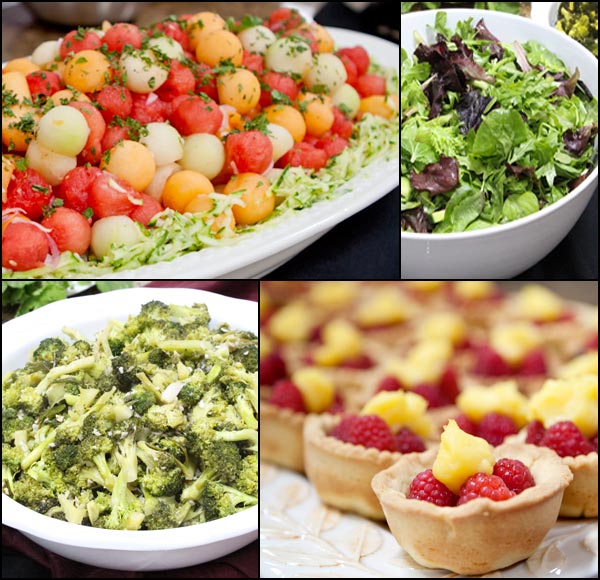 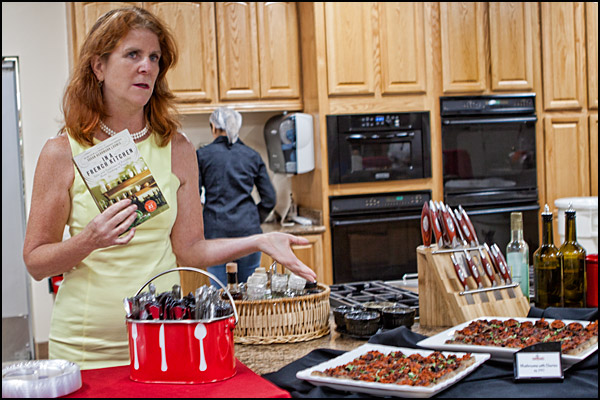 Another favorite recipe from Susan’s book is an untraditional version of Matafan, with baking it instead of frying. This results in a light and savory bread/cake, which is perfect for supper. 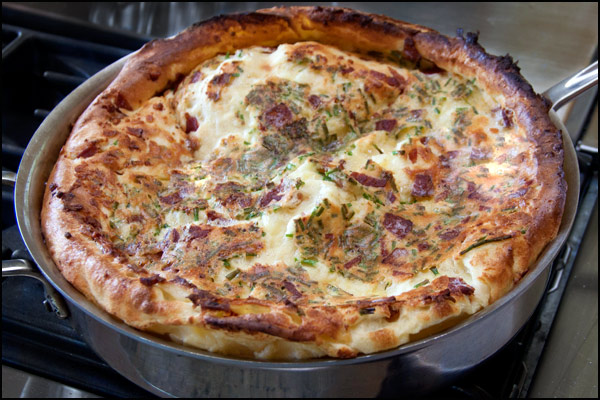 Everyday Eggplant (Aubergine Pour Tous Les Jours) is a perfect example of simplified French cooking. This recipe is an easier and lighter version of Eggplant Parmesan. 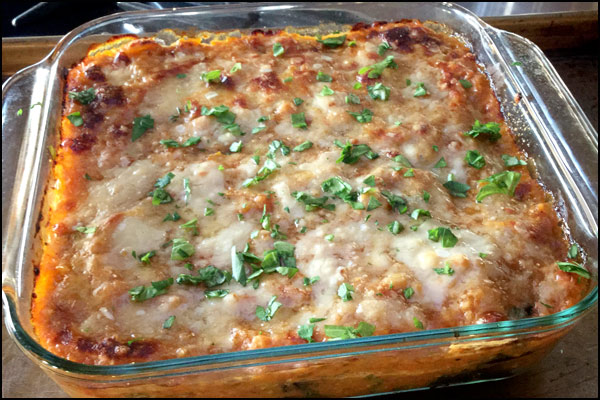 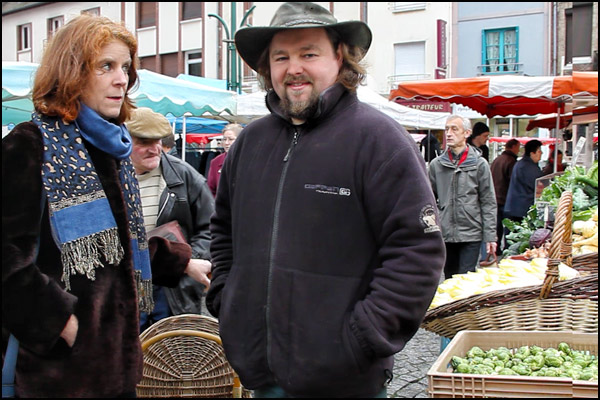 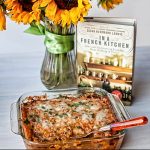 Quote of the Day:

“Cooking like the French, in a French kitchen, is the shortest route to happiness, warmth, pleasure and delicious times.” –Susan Herrmann Loomis

I think cooking like the French in any kitchen gives that! Bon Appétit.
…and then, she paused for thought. 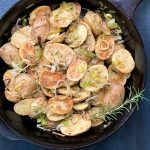 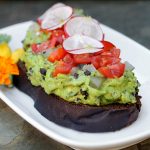 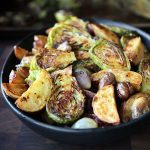 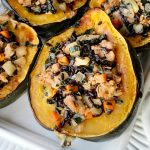 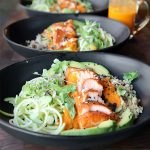