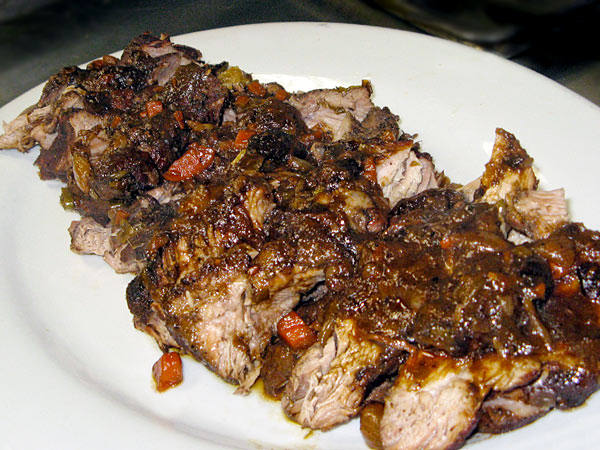 This week’s class we came straight out of the gate cooking. We were braising a trail with the tougher cuts of beef, pork, and veal, and needed plenty of time to get our meat to the “fall off the bone” stage. My job was cooking Pork Butt with Port and Prunes, which gives me plenty to laugh talk about.

Why put pork on your fork

Pork is naturally low in salt and a rich source of protein. It is also a good source of iron, zinc, B6, B12, vitamin D, and selenium.

Today’s pork has been bred to be 31% leaner than the pork we ate in the 80’s. The pork tenderloin is as lean as a skinless chicken breast with 2.98 grams of fat per 3 oz. serving.

The pig is one of the oldest forms of livestock and was domesticated from the wild boar roughly around 5000 B.C. in the Near East. Today, China is the world’s largest producer of pig meat.

In addition to food, pigs’ hides were used for shields and shoes, their bones for tools and weapons, and their bristles for brushes.

Pigs have a keen sense of smell. Their sensitive noses lead them to truffles, an underground fungus highly valued by my friend Erika, the Trufflepalooza queen, who cooks all sorts of wild dishes with them. Click here for some good truffle recipes.

The USDA treats pork as a red meat. So why did the U.S. National Pork Board have an advertising slogan of “the other white meat“? Because popular opinion says white meat (chicken and turkey) is healthier than red meat. People still think that pork is a white meat… that is the power of advertising.

To set the record straight, pork is a pale color because pigs aren’t as mobile as cattle, therefore, their muscles don’t use as much oxygen. Less oxygen means less myoglobin, the red-colored molecule, which is where the meat’s color comes from.

Like beef, pork in the U.S. has 8 primal cuts. The most tender cuts of pork are from the loin and rib. It’s where we get the expression “high on the hog” — the most desirable cuts of meat come from higher up on the animal.

Head/Jowl:  This can be used to make sausage, stocks and soups. After boiling, the ears can be fried or baked and eaten separately. Oh dear!

Boston Butt/Blade Shoulder: A moderately tough cut of pork with a good deal of connective tissue. Best suited for braising and stewing, or for sausages. Pork butt, despite its name, is from the upper part of the shoulder. It has more fat, which we know in French cuisines equals flavor.

FYI: Why is it called pork butt? In pre-revolutionary New England, shoulder roasts were packed and shipped, often from Boston, in a barrel that was called a butt.  Why is a barrel called a butt, you ask? In England brewers once used a large barrel called a “butt” to store beer or wine.

Picnic Shoulder/Arm Shoulder: Another tough cut that is frequently cured or smoked and used for making ground pork or sausage meat.

Spare rib: Taken from the pig’s ribs and the meat surrounding the bones, spare ribs are flatter and contain more bone and fat than meat. They work best when barbequed or braised.

Loin – Created from the tissue along the top of the rib cage. Since they’re lean, these cuts tend to dry out if overcooked.  Pork is safe to eat if it’s cooked to an interior temperature of 160 degrees. Loin cuts are delicious roasted, grilled, or broiled.

Side/Pork Belly: The belly, although a fattier meat, can be used for steaks or diced stir-fry meat. The pork belly is where we get pancetta and bacon.

Legs/hams – Although any cut of pork can be cured, technically speaking, only the back leg is entitled to be called a ham. When used fresh, they are usually cut bone-in for roasting.  Serrano ham and prosciutto are made from hams that are cured, smoked, then air-dried.

Foot/Hock: High in collagen, pork feet are an excellent source of gelatin and frequently added to soups and stews. Slow simmering breaks down the tough connective tissues in the pork foot and tenderizes the meat. Pork feet can also be cured, smoked or pickled.
FYI: Other edible parts include knuckles, intestines, snout, snot and all. Basically, everything but the “oink”.

Some of my fondest memories from childhood are munching on pickled pigs feet with Leland Olson, my friend Pam’s father. It was such a treat.

While working on the Olympics in France, I was served Pig Snout Salad. It was pale pink with a dressing that looked like the pig sneezed on the salad.

I guess it is an acquired taste from a young age. 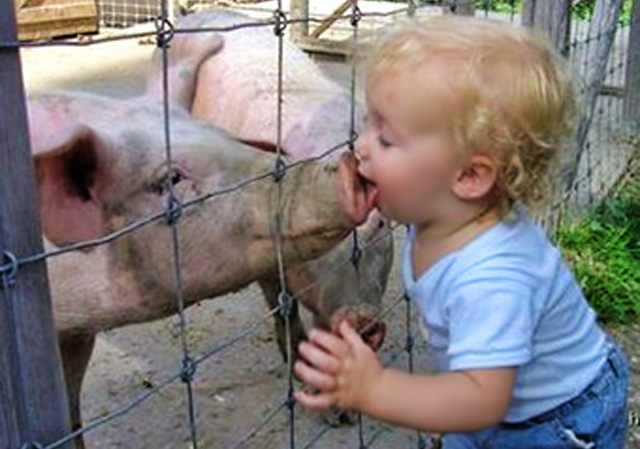 I was given the task of making Pork Butt with Port and Prunes… try saying that three times! Something about cooking with “prunes and butt” kept my inner adolescent boy laughing all evening.

It’s really too bad prunes are the butt of many jokes, but you can have the last laugh by eating dried plums (prunes) because they’re loaded with antioxidants and fiber, and are excellent for keeping bones strong.

Rona made Blanquette de Veau (a French creamy veal stew) one of my favorite dishes of the evening. Click here for the recipe and her side of the story. Pork Butt with Port and Prunes

From New School of Cooking
Serves 4-6

Serve with rice, boiled or mashed potatoes, or egg noodles.

Quote of the Day

Gardening Tip: When the plums dry on your tree, it’s time to prune
…and then she paused for a laugh.

Hope you have enjoyed our adventure in the culinary classroom. Join us each week as we continue learning new culinary skills.